TO SIGHTS NOT TO MISS

Intriguing and fascinating like no other place on the island, Trapani and its territory represent the corner of Sicily that more than any other knows how to excite and enchant. In this place, suspended between sky and sea, you reach peaks of incomparable excellence. The splendor of the Trapani coasts are full of breathtaking views of which the sea is the absolute protagonist, it blends with the timeless charm of an area made of art and culture, but also of people, traditions, habits, staging, every day of the year, an endless show that captures the senses and the mind. 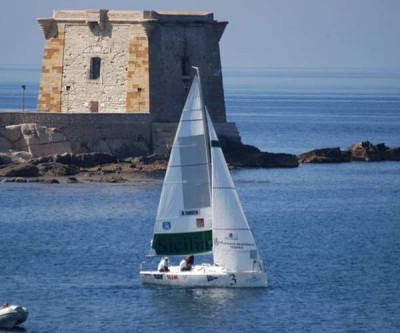 Visiting Trapani is like choosing to float on a "raft" anchored between two seas. The Tyrrhenian and the Mediterranean. A "raft" full of history and love, marked by time and by the peoples who have inhabited it.

Elima city that belonged to the Phoenicians, the Arabs, the Normans, Trapani preserves, culture and traditions that still today reveal those transits. The city, coveted by position and vocation over the centuries, can only be its sea and its historic center. A generous sea that remains the beginning and the end of everything. Even today the waters that surround the city, in addition to reflecting its beauty, remain the resource of the many inhabitants of Trapani who have always undertook the sea with hard work.

The ancient fishing port in the old quarter of the barracks remains an example of such industriousness. At the first light of dawn the return of the many fishing boats loaded with good catches is marked by the thick voices of fishermen and merchants who "shout" try fruitful sales. Voices, colors, smells, every morning are perpetuated deserving the sight of those who want to touch the soul of a city that lives by its sea.

A maze of narrow streets induces the wind and a dense web of houses, once fishermen's homes, connects the two seas, taking on the shape of a scythe, on the tip of which stands Torre di Ligny. Built in 1671 to defend the city, the square-plan tower located on the last useful rock, before the open sea, is now the site of an anthropological museum and together with the castle of Mare called “la colombaia” (ancient prison house) built on a small island in front of the fishing port, it remains a bulwark and symbol of a city that sought defenses. 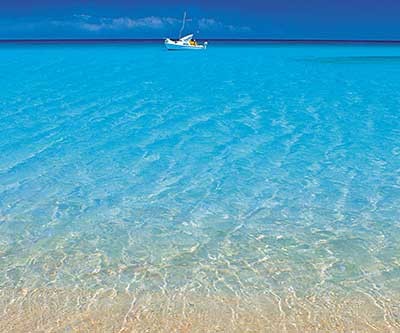 There are about 40 km that separate Trapani from San Vito Lo Capo. Choosing to visit this ancient fishing village, until the end of the 60s of the last century only place of residence of fishermen, means above all enjoying one of the most beautiful beaches in Italy.

A very long arc of very fine sand, embraces a sea that is always transparent and crystalline. The same water that creeps between the small bays of white gravel, under the ridges of the natural reserve of the "gypsy", a protected oasis that can only be walked on that connects San Vito Lo Capo to the enchanting gulf of Castellammare with its wonderful stacks.

S. Vito Lo Capo besides being a favorite destination for those who love direct contact with nature, allows you to enjoy, on booked dates, some booked appointments with the various events that periodically interest the visitor, from the international kite festival, to the now famous "cus-cus fest".

An important international gastronomic event in which the various cuisines of the countries bordering the Mediterranean take part, each ready to offer its proposal of "cus-cus", a strong dish of the Sicilian tradition but of Maghreb origin. 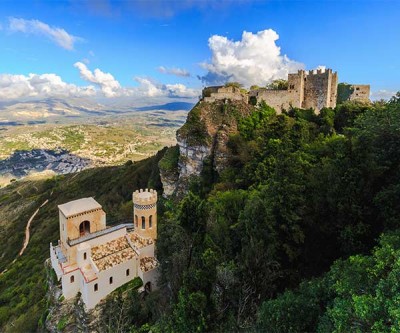 A 751 mt s.l.m., surrounded by a lush pine forest, on the summit of Mount San Giuliano, stands the enchanting Erice high in the sky. A maze of medieval lanes paved with ancient basole where time seems to have stopped. It was Erix for the Sicans and for the Elimi. Harucas for the Punics. The Erico of the Romans and the Gebel-Hamed of the Arabs.

Inhabited since prehistoric times, Erice offers unparalleled views that catch the eye thanks to the green valleys of the agro-ericino and the magnificent "fleet" of the Egadi islands. From the marvelous gardens of the Balio near the castle of Venus, in the eyes of the lucky visitors, the three "Egadine pearls" Levanzo, Favignana and Marettimo stand out as three superb sailing vessels. In this very ancient village a still flourishing handicraft foresees the realization of carpets in bright colors knotted on ancient looms, result of the impossible weaving of raw canape.

During the visit to Erice do not miss the tasting of the sublime local patisserie fruit of ancient recipes that skilled pastry chefs from the summit have inherited from the hard-working cloistered nuns of the ancient convent of S. Carlo. Countless churches, all interesting, do not miss a visit to the Mother Church that preserves intact a marble altar by Gagini. 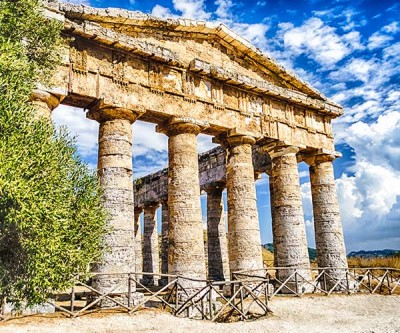 At 20 km from Trapani on the route to Palermo, 2 km from the "Segesta" exit, you find yourself immersed in the ancient city of Elima. Of the urbe of this ancient city, built by Trojan refugees (Elimi) on the top of Mount Barbaro, few but important vestiges remain, as well as a beautiful and majestic temple and a Roman amphitheater entirely in stone, from which you can enjoy a breathtaking view.

This information would be enough to arouse a good curiosity and lead to the visit, but net of the history that still oozes from the stones of Segesta it is still good to know that Segesta, with all its valley extending from the village of Calatafimi to Castellammare del Golfo, represents an oasis of peace.

A colorful, perfumed peace. The intense green of the woods that surrounds the archaeological site contrasts the yellow of the wheat fields to the harvest to reappear emerald on the infinite expanses of vineyards lined up in rows. Spikes and vine leaves moved by a fragrant wind that comes from the sea. Edges of agave to mark paths and red prickly pears when they are in season. 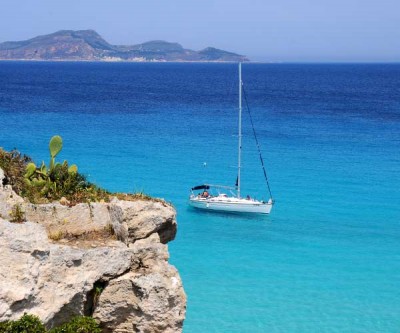 Well connected by the port of Trapani with hydrofoils and ferries, the Egadi Islands are their enchanting sea. A liquid poem, recited by the color, the smell and the transparency of waters of unparalleled beauty. The beautiful red cove and blue cove in Favignana or Cala Minnola in the small Levanzo, not to mention the depths and the fantastic sea caves of the most distant Marettimo, alone would be enough to justify an excursion on this fantastic archipelago. Favignana, common capital of the Egadi, which the Greeks called "Aegusa", remains an interesting and lively seaside village that offers all the services of first necessity.

The island morphologically distinct from a mountainous part and a flat area allows the view of different natural landscapes always framed by the fabulous sea. To visit the old tuff caves and the Florio plant, examples of a laborious past made of hard work lavished in "ditches" of limestone or under the "spans" of what was one of the most important fish industries in the Mediterranean, a site now converted to a cultural container. Not to be missed in the period May-June the renewal of the ancient ritual of the slaughter, an example of tuna fishing as spectacular as it is emotionally touching.

The largest of the three islands also stands out for its good gastronomic offer thanks to the many restaurants offering various recipes, always based on good fish. To consider the possibility of tasting good fish also on board fishing boats equipped as fishing-tourism. The landing on the other two pearls of the Egadi, namely Levanzo and Marettimo remains in the name of predominantly naturalistic excursions. Levanzo, the smallest of the three islands, entirely mountainous, with paths that climb through the thick Mediterranean scrub, welcomes visitors in a very small village.The few houses and the few accommodations are the advantage of those who choose only contact with the sea and without other "distractions" is ready to discover beautiful and unspoiled places. The island already inhabited in the Neolithic period bears witness to the passage of man in the "Genoese cave" where it is possible to admire graffiti dating back to 5000 years ago. Last in order of distance from the coast, Marettimo. Even with this island nature it has been particularly generous. Wonderful backdrops, sea caves of superb beauty, diamantine waters and rocky ridges that rise imposingly from the sea characterize the last part of the Egadi. Visiting Marettimo means choosing your journey by boat. Many fishermen offer visitors the chance to swim in one of the many caves that can only be reached by sea. The interior of the island remains interesting for those who love trekking or for those who want to visit it on the back of donkeys that live on the island, a sort of "hippotherapy" in the heart of the Mediterranean.